Another Washington Post Peeps Diorama contest deadline has passed and yet again there is no entry from the Crafty Lawyer.  The contest, which challenges Post readers to build a shadowbox scene with marshmallow Peeps, is a sure sign of spring in D.C. Hundreds of people submit pictures of their Peeps pursuits–corny, clever, and sometimes downright cool. Points are awarded for creativity, artistic merit, and punnery.  Yes, the more your Peeps story represents a play on words (like Rest In Peeps: Farewell to the Twinkie or   NightPeeps ) the higher you rate in the eyes of the judges.  Every year I think to myself that this will be the year I do my own Peeps magic.  It’s not the pun or the play on words that stops me in my tracks (we had a great idea this year but I must keep it secret in case we try again next year).  No, I have found that what really separates the women from the chicks, so to speak, is the ability to dress a Peep.  Alas, crafting with Peeps is HARD.

In case you are intrigued, I want to share a few things I learned this year about working with Peeps.  I offer these in the spirit of encouraging you to consider making your own Peeps scenario, whether for the contest or just for your dinner table.

1.  Start early. Because Peeps are now sold all year long, you can find peeps in many colors and shapes throughout the year.  If you think you want to try the Peeps challenge, pick up some Peeps at Halloween, Christmas, or Valentine’s Day.  Having a variety of colors and shapes gives you more possibilities for making Peeps figurines but it also lets you make other parts of your display out of marshmallows as well.   For instance, at Miss Pixie’s Furnishings and Whatnot in the District they have a year round display of pink Peeps clustered on branches to look like cherry blossoms.

2.   Peeps are deceptively hard to work with.  The little chicks, in particular, don’t particularly take to being dressed up.  They have no waist, you see, so trying to put a fairy tutu on them is, well, awkward.  Sometimes people make it easy on themselves and just cut the heads off and stick them on other figurines, but adapting to the shape of the Peep is part of the challenge.   We found that the rabbits are slightly easier to use as stand-ins for people, but if you want arms, you will have to add them separately.

3.   Stale peeps are a good thing.   Turns out that the less sticky the peep, the easier it is to cut it up and manipulate it.  In fact, you can actually do some pretty good sculpting once the super sticky parts have been beaten into submission.   After much pummeling, we turned the bottom of a chick into some fairy wings. 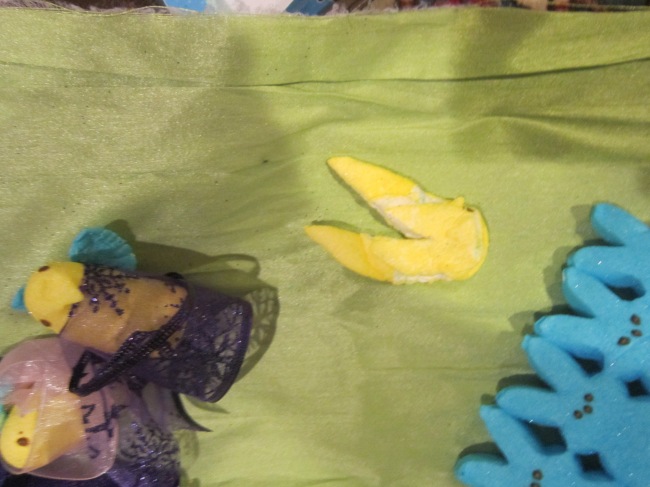 4.  There will be carnage.  We went through a number of peeps to produce just three figurines–and several ended up looking more like something from a horror show than a delightful diorama.  Be strong.

5. Schedule plenty of time.  After hours and days of work we still had only three figures and no background.  We gave up–what can I say? 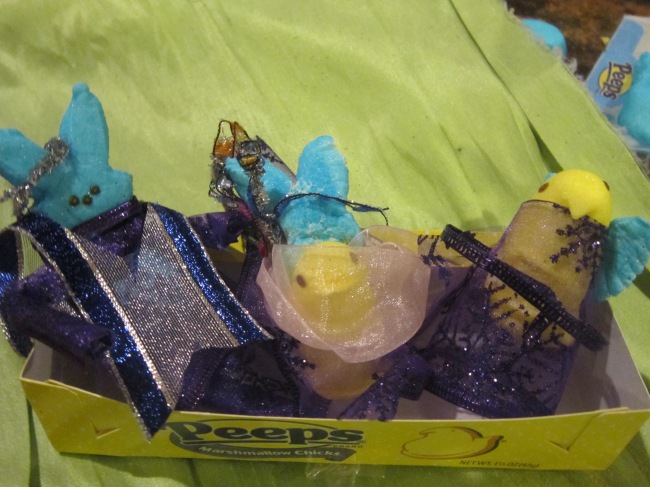 6. When you give up, decorate with Peeps.  I recently made a birthday cake for crafty friend Jennifer with cream cheese frosting.  It was pretty but didn’t scream spring like I had hoped.  Adding a few bright colored peeps to the top changed the look completely.

7.  Don’t eat the peeps–unless they are dipped in chocolate.  My favorite way to use Peeps is to see them coated in beautiful milk chocolate from my favorite D.C. candy store, Kron Chocolatier.  The best thing about this crafty use of Peeps–someone else did the dirty work!!