The crafty daughter has been craving a good pumpkin chocolate chip muffin recently and I knew I had the key ingredient–a can (in my case, three cans) of pumpkin in the pantry.  I love the idea of pumpkin food–bars, soup, muffins–and I dutifully buy at least one can every year as Thanksgiving nears, but I rarely act on my pumpkin impulse.  I’m not sure why.  Canned pumpkin is inexpensive, good for you, and an easy ingredient to use, but I’ve just never followed through on my good intentions.

Before I could make muffins, however,  I had to first do a little internet searching, as in–how long does canned pumpkin last  (the good news 5 years), so I was covered in that respect.  And I had to find a recipe!

Ah,  I thought, perhaps this is why I never follow through on my pumpkin cooking plans–I realized we had no true legacy of pumpkin recipes in my family, or in my husband’s family.  Yes, pumpkin pies made an obligatory appearance at Thanksgiving, but I’m pretty sure most were purchased or made straight off the Libby’s can, and I just couldn’t remember doing much with pumpkin otherwise.

I have a couple of go-to baking books at home: Dorie Greenspan’s Baking: From My Home to Yours and Cook’s Illustrated’s Baking  Illustrated, but this felt like a job for one of my go-to internet sources: the Smitten Kitchen.  Not only did I find a pumpkin muffin recipe, see below, but a couple of good insights  a) pumpkin bread can handle a whole can of pumpkin b) avoid pumpkin pie filling like the plague (all sugar and spice, but not good for you) and c) there’s a lot of pumpkin hate out there, courtesy of the pumpkin spice-everything craze.

Unlike Kai Rysdaal, the host of NPR’s Marketplace, a well-known hater of pumpkin spice lattes, I don’t have anything against the flavor.  I’m not crazy about the idea of pumpkin spice Pringles or M & M’s, but in the coffee world, a little pumpkin spice is nice.

In the muffin world, however the notion of pumpkin spice is a bit more meaningful, as pumpkin on its own is kind of bland.  It perks up considerably with a nice mix of cinnamon, nutmeg, ginger, and cloves–the common ingredients of pumpkin pie spice–but the critical addition is really chocolate chips.

Smitten Kitchen’s recipe does not include chocolate chips, and I guess I could have hunted for a different recipe, but I trust the baking know-how of this site, so I just did the logical thing and dumped a whole bag of chocolate chips 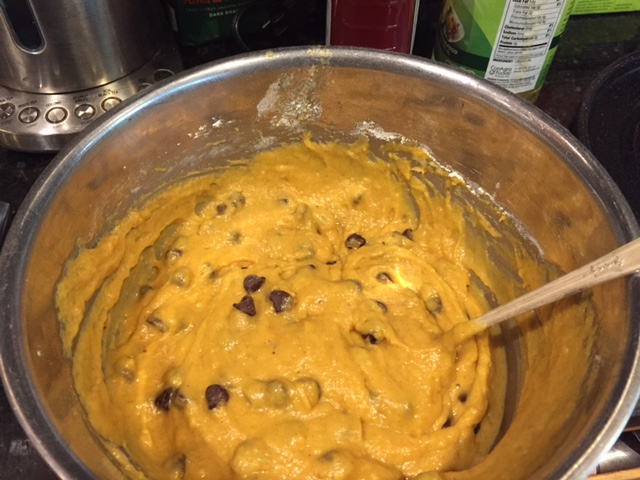 into the mix at the end.  I also used the whole can of pumpkin, trusting in the advice that the muffins could take it.

The results?  Muffins so good that the crafty daughter begged me to make them again, telling me that they may just be her new favorite muffin.  Maybe they will become your favorite, as well!  Enjoy!