In the sixteen years I have lived in Washington, D.C., I’ve lost track of the number of times that our monuments and landmarks have been obscured by scaffolding.  But ever since Michael Graves first designed scaffolding for the Washington monument years and years ago, I’ve kept track of some of the more attractive uses of pipe and board and construction gizmos to make the art of rebuilding beautiful in itself.  The 2011 earthquake in D.C. led to several striking examples of creative scaffolding  which, two years later, still grace our cityscape.   Say what you will, I think the Washington National Cathedral looks rather jaunty with its scaffolding caps–at least from a distance.  And the latest scaffolding surrounding the Washington monument creates a brick by brick facade outlined in blue–giving the otherwise white marble landscape new texture :

And sometimes, the scaffolding literally brightens the sky: 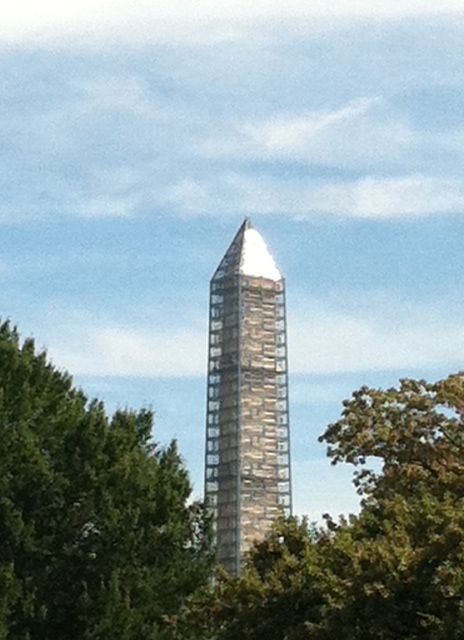 which goes to show that something that most people consider to be ugly or an obstacle to beauty can, itself, become effervescent!